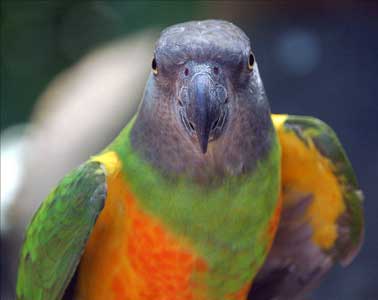 It’s spring which is generally breeding season for most parrots.  There are some exceptions that bred all year long or in the winter only, but the majority of birds are starting now.  Just because your bird doesn’t have a mate, does not mean it is exempt from the hormonal changes this time of year brings.  It is important to understand your bird in an attempt to avoid aggressive behavior.

There is not one set behavior that indicates your bird wants to mate, but rather several.  Over bonding with just one person is a no no, as it is more than probable your bird looks to you as its mate.  One of the things I consider taboo is for one of my birds to refuse to go to other members of my family.  I will admit I am their favorite person, but I make sure they all go to my husband.  It is flattering to know they love me so much, but if something were to happen to me, my husband would need to be able to hold and take care of them.  That would be impossible if they are use to lunging at or biting him.

That obviously leads to the question of how to avoid that from occurring.  It is as simple as the person they are bonded to not accepting that behavior.  I have a story that illustrates typical behavior and how I got around it.  One night I was holding my Red Fronted Macaw when my husband came over and started massaging my neck.  The feathers on his head went up and he started to immediately lunge at my husband.  In bird language he was warning my husband away.  I quickly told him no and handed him to my husband.  The next night when I was holding him, I told my husband to come over.  This time he started lunging at me. In bird language he was telling me he couldn’t defend me and our space, and I had to leave.  My response was identical.  I told him no and handed him over.  The third night was just adorable.  Instead of lunging at anyone, he looked at us and said “I wish the two of you would stop that”.  He never tried that again.

While that was an easy fix, it doesn’t always work that way.  I caught the behavior when it just started and was able to stop it immediately.  If your bird has been getting away with it, it will be a slower fix.  Patience and consistency  is required.  If your bird lunges, there are several things you can do.  Sternly tell them no and try to hand them over to the other person.  If they lunge again, tell them no and stroke the other persons arm.  What you are telling them is that the other person is okay and they can go to them.  If they still try to bite, sternly tell them no and put them in their cage.  You might need to do this for several months.  It is hard to change behavior once started but not impossible.  The goal here is to catch it before it because a problem.

The Battle Of The Sexes