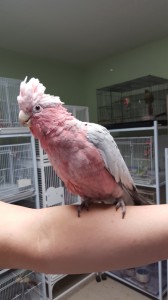 As discussed in an earlier blog, we now known what to do if your bird is aggressive towards you or someone else due to seasonal hormonal changes. Unfortunately, that is not the end of their behaviors. In some cases it is only the beginning.

Your holding your bird and suddenly he/she is trying to regurgitate. Obviously everyone’s response is that they are sick. Since I am not an avian vet, I would never tell you not to worry about it. In most cases though, your bird is simply looking to you as its mate, and wants to take care of you. What better way than to fed you? I would strongly recommend that you try to stop that behavior quickly. Bacteria in your birds crop will come up into their throat and mouth and could make them sick. Better though they throw it up than swallow it. Not wanting to encourage that behavior I tell them no, switch hands, or move position and place if it comes to that. I have also had to put my birds back in their cages when they do that. Unfortunately, that behavior generally does not go away once started, but consistency on your part can help slow it down.

Okay, so what other behaviors does your bird do during this time of year? Vocalizing is a big one, tearing paper up to make a nest, finding a cozy spot to hide in, getting grumpy and moody, rubbing up against a favorite toy, or putting their butt up in the air. All big hormonal signs that require different responses. The cozy spot and the rubbing against is easy if it is in their cage, simply remove the object. The same would hold true for any object outside the cage, unless it is a big bulky piece of furniture or cabinet. In that case you could move the cage to another room and totally switch up their environment. Birds generally dislike change and that could stop that behavior. Vocalizing and aggressive behavior could be changed by ignoring it, or putting them in time out. Chances are it will not work, but it is worth trying. The good thing about hormones, is that it generally ends once it is too hot and the days get shorter unless they are a winter breeder. The last thing worth mentioning is weight fluctuations during this time. Birds will bulk up during their mating time to fed babies and than lose it when they do not need the extra reserve. For several years I ran one of my birds to the vet in a panic when she had huge weight loss. I was finally told the reason why and was okay with it.

As a final thought, mirrors in cages are generally not a good idea. The stimulation of it could force your bird into a breeding response also. Your bird could bond with the bird in the mirror and display some or all the above mentioned behaviors. I would suggest you do as little as possible to stimulate that for not only your sake but your birds as well.